Again hard bottoms are the place for these designs; the short condensed shape of this lead coupled with the two flat sides
makes it the perfect lead for bolt rigs at short to medium range. By its very nature the flat pear lead lends itself to being
fished on marginal slopes, the sides or back or gravel bars and in rivers. But, in fact it is open of the most effective shapes
at short to medium range because it holds so well on the lake bed and offers so much resistance to a moving carp.
We have also seen that this type of lead is by far the most like a stone on the lake bed and during the Filming of
Parts 1, 3 and 4 this lead blended in better than any other. Popular misconception 'Flat leads sit on silt'. This does
not happen, any lead finds its easiest path through the water so instead of fluttering down to the lake bed, a nose heavy
flat lead like this will plummet down side on and nose first.Making it probably less effective in the silt than say a Swivel
Pear lead, having said that it is devastating on gravel and is Danny's first choice in these close range hard-bottomed situations.
Danny noted when filming part 3 of the Underwater Videos 'I tried a Flatliner Pear on the steep gravel slope to see if it really did
hook the carp quicker than a swivel lead of the same shape and to my amazement it really did! I had been testing the lead clips
for so long I had ignored the inline lead - not any more!' 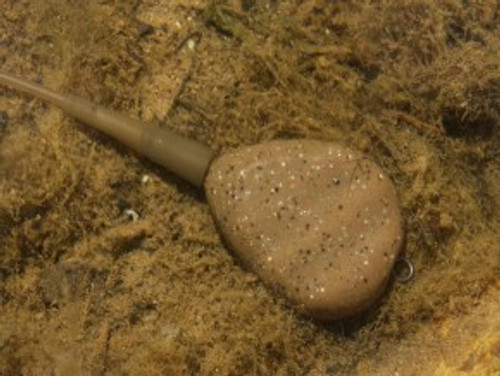